For the first time since 1996/97, Dr. Tarwater reported that enrollment is stabilizing with 3,884 students as of yesterday up 88 from the end of last year. He said that elementary schools made the biggest gains, particularly at the kindergarten level with up to 326 students, which bodes well for future trends. We’re seeing “the bubble” exit at the high school level, where classes are below 300. In addition, LTUSD has taken over a school that was previously run by the County (TREC) and they are attending at Mt. Tallac High school in the afternoon. Dr. Tarwater reported that the next shipment of netbooks will arrive next week. There were two previous shipments of 650 and 900 so this should complete the program for grades 3-12. As we are on the cutting edge and, perhaps one of very few Districts in the state with this program, there are learning curves and hiccups along the way……..so bear with us!

Middle school parents may see our illustrious leader out in front of the school directing traffic and greeting students this year. He’s also squeezing in all of the HR Director duties into his day, along with keeping up with the roller-coaster ride that comes with introducing new technology. Board members commented that parents really love being on Aeries and having the ability to track their children’s progress and attendance; “it’s a great tool for families to use”.

Report on LTUSD Athletic Facilities  We were in awe in 2007 when the Community Youth Sports Complex was completed over that summer, but that’s nothing to what has happened this past summer! Dr. Tarwater briefed the Board on all of the upgrades that have happened since June. As you know, we have a fabulous new artificial turf field with stadium lighting, complete with fencing and gates to protect the investment. And, construction on the concession stand and ADA-compliant bathrooms will begin next week. We’re still coming up a bit short ($170,000) on funding for Phase I, and will be launching a campaign for Phase II at Friday Night Lights (9/16). The first round of commemorative bricks have been ordered and will be here at the end of September. Anyone who purchased bricks after the extended deadline of August 5, 2011 or will purchase bricks between now and next Spring will have their bricks installed next summer in Phase II. (CLICK HERE FOR AN ORDER FORM) Dr. Tarwater said that District personnel are still aggressively pursuing grants. Ivone Larson just wrote one for $50,000 last week and Pixar is still in the running.

Board of Education Report

Board members have been enjoying the athletic events and back-to-school nights. Larry Green said that the commemoration of the 9/11 tragedy at LTCC was very moving and many of the local people who protect us were there. He thanked them for keeping us safe. Judy Cefalu was amazed at the huge turnout last week in support of Cody Higgins where almost $17,000 was raised to help with medical expenses after he suffered a series of strokes. She said that he is home and in recovery. Mrs. Cefalu also expressed her sadness at the loss of her friend, Florrie Donovan, who was shot and killed last week in Carson City by Eduardo Sencion (a former STHS student). Wendy said that Florrie was an Aide at Al Tahoe Elementary when her kids were young and was a lovely lady.

Mrs. David reminded people that the Lake Tahoe Educational Foundation Food Fest is coming up on October 8th and the Board will be donating a basket for the silent auction. She said that she’s been “riding on a high” since the opening of TADA and Friday Night Lights and that the community is in awe and very pleased at how our funds are being used. She attended a “Ready by 21, Credentialed by 26” forum at LTCC last week, funded in part by the Gates Foundation. The participants took a tour of the new campus at STHS afterwards and were mightily impressed………if not a tad jealous!

Wendy also noted that the Lake Tahoe Collaborative was informed this week that Blue Go will no longer be sold after October 1st under their proposed changes. This is cause for concern for many of the non-profit agencies that assist people with transportation via tokens, particularly Mt. Tallac High School. They will also be raising their “on call” price to $10 each way, which will have an impact on families.

Surprisingly, we heard a report on the financials that was not filled with doom and gloom for a change, but we’re not out of the woods by any means yet. Lynn Dupree, who was sitting in for Deb Yates last night, delivered the news that the ending fund balance increased by $655,000 over the prior year and that expenditures were below revenues for a change – Woo Hoo! The bright spot was that we unexpectedly received almost $500,000 in May – one-time State Fiscal Stabilization Fund money designated to minimize and avoid reductions in education. However, when other districts didn’t do what was required of them to access the fund, districts like LTUSD got more of the pot! Winners! Lynn also pointed out that everyone did a great job of controlling spending and monitoring their budgets.

But, as I said, it’s not a bed of roses – over 50% of the District’s funding is still deferred until next year; money that is essential to meet payroll and other obligations. We’re still absorbing prior year declining enrollment funding. A shift of Mental Health Services to Education (AB3632) has an unknown impact on the general fund at this time. State revenue projections have not been up to expectations, despite the fact that they were up $135 million in August. Transportation funding is still threatened with cuts in January of if state revenue projections don’t materialize. Lynn pointed out that “Home to School” transportation costs over $1 million, but we only get $766,403. Special Ed. Transportation is even worse – cost is $271,057, with only $68,054 received. That means that the District has to come up with almost a half million dollars to provide transportation to students who otherwise cannot get to school.

We were all kind of happy that Lynn Dupree didn’t “drill down” as much as Debra Yates in her presentation, but we do appreciate the incredibly hard work both women put into keeping the District’s finances intact and solvent, while many other districts across the state are floundering.

Oh, there was some other good news at the end……..We just found out that we were successful in a bid for the “School Bus Replacement Grant Contract” through the Sacramento Metropolitan Air Quality Management District. That’s $300,000 for two new buses. Winners! If you recall from the last meeting, two more new buses will be purchased (financed at less than 2%) – so that’s four in all!

So, that’s about all I have to report on today. The other two items on the D&A agenda were to approve solicitation of bids for the Girls’ Softball Field Dugouts and for the security fencing at STHS Viking Stadium, which I’ve already address.

Get involved with your local community and help clean our local streams and beaches by participating in the 2011 Great Sierra River Cleanup!

Join us on Saturday, September 17 from 9:00 AM to 12:00 PM at locationsall around the lake. Every year volunteers from around the lake scavenge the stream banks and shores to pick up golf balls, broken bottles, appliances and more in an effort to clean up our precious local waterways. Click here to sign up to volunteer! This Great Sierra River Cleanup is the largest cleanup effort in the Sierra Nevada. The event is taking place throughout the Sierra region which in turn is part of the California-wide Coastal Cleanup Day. This is one of the largest volunteer events in the state – 4,500 volunteers from around the Sierra came out last year to pick up over 150 tons of trash! We are proud to include many of the rivers and streams around the lake for this year’s cleanup. This event is for the whole family and we are encouraging schools, churches and other groups to join us! There will be a volunteer appreciation party afterwards held at Regan Beach including a pizza lunch.

Be a part of this historic effort!
Volunteers can pre-register at: http://j.mp/gsrc2011

Join Tahoe RCD and friends in the Lake Tahoe Demonstration Garden (located at LTCC) on September 25th for our 4th annual Autumn Fest! Admission to the festivities is FREE and there will be entertainment and activities for all ages: gardening and sustainability presentations, live music, crafts for kids and adults, games, local artisan market, dancing, storytellers, pony rides, food and, of course, the pumpkin patch. As well as being a celebration of the turning of the seasons in Tahoe, Autumn Fest is also the primary fundraiser for the Garden so be sure to check out the silent auction! We hope to see you there! For more information on event details, donations and volunteering, contact Kirsten at klindquist@tahoercd.org or check out the Connect webpage on our website, www.tahoercd.org.

"Deb Howard & Co were great. Wally was professional and very timely in his communications. "
- 3847 Saddle
View All 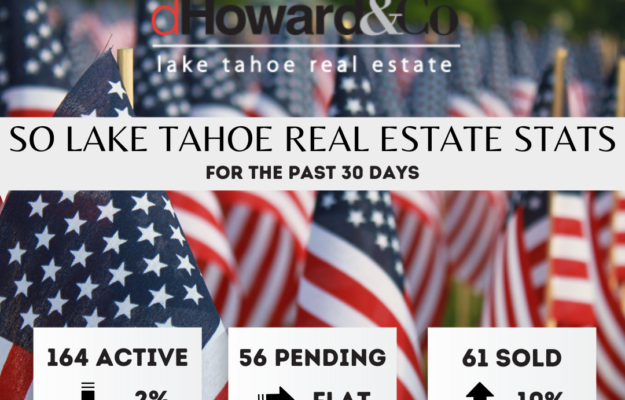 The story this month is “inventory has gone up”, hitting an all-time high in nearly a year of 164 sfd homes active … END_OF_DOCUMENT_TOKEN_TO_BE_REPLACED